For the first time in what certainly seems like a long time, RPG fans are looking forward to an entirely new post-apocalyptic world to play in. A new trailer, which adds depth and the beginnings of a story to Horizon Zero Dawn, has eased the doubts of many gamers.

Horizon Zero Dawn, which is being released for the Playstation 4 next month (Feb 28), has been in development from 2011. Guerilla Games’ game director, Mathijs de Jonge, considered the game “the most risky” of about 40 concepts pitched after the release of Killzone 3.

The risk seems to be paying off. Horizon Zero Dawn has won the ‘Best Original Game’ award at the Games Critics Awards two years running; that, plus the steady release of trailers and a delayed release date, means that the hype train has really left the station.

So, what do we know so far? We’ve been aware of the massive, robotic dinosaurs since concept art was leaked in 2014. Gameplay videos and more information from the company have revealed a world inhabited by tribal cultures (slightly reminiscent of Far Cry Primal).

Our protagonist, Aloy, roams a beautifully-rendered 4k landscape, a very long time after some catastrophic event wiped out our modern society. She can craft weapons and traps (fairly simply, as we’ve seen from gameplay videos – the developer deliberately avoided an overly-complicated crafting system) and deftly battle with robotic creatures many times her size. The game will give players a lot of freedom of both movement and tactics.

But, despite all of that, the most recent ‘Story Trailer’ is what has really peaked a lot of gamers’ interest.

Now, some of the apocalyptic wasteland lovers amongst you might have, at first, been put off by the images of a lush, green future world. Early glimpses of New Horizon Dawn didn’t seem to have the grit and atmosphere of, say, the Fallout universe – despite the old-meets-new contrast of the shiny chrome dinosaurs and hide-wearing hero.

This new trailer adds depth and darkness to the world that Guerrilla Games has been teasingly revealing to us. The origin of the protagonist becomes a little clearer: a young woman leaving the safety of her tribe in order to protect it against a masked enemy who massacred her people. She goes to a place called Meridian to spread the word about the threat and, presumably, get a little help in defeating it.

We also get the first glimpse of our foe – a Caesar-like leader exciting crowds from a balcony. He is raising a “storm of shadows” to “take back what’s ours”.

Earlier trailers have set the scene, but this new snippet gets to the meat of the game. We can see epic battles, massive explosions and emotional dialogue. The glittering dinosaurs are joined by darker, scarier robots oozing a slightly hocus-pocus-looking ‘corruption’. All of this in two-and-a-half minutes, which is fairly impressive by itself.

Oh, and in case you wanted another reason to get excited, a holographic Lance Reddick pops up, introducing himself as an “interested party”. We’ll find out what that means soon enough. 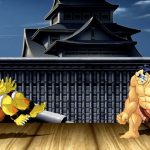 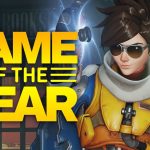