Marvel has revealed a ‘launch day bonus’ Into the Spider-Verse suit for Insomniac Games’ Spider-Man: Miles Morales, which will be available to both PS4 and PS5 players. We’ll also break down the Sony Crunchyroll deal. Sony is aiming to buy Crunchyroll to add to their anime collection, the list of XBox Series X launch titles, and a giant metallic asteroid worth $10,000 quadrillion (or 10 quintillion) is orbiting around Mars and Jupiter. 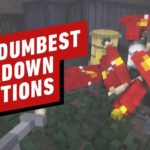