We’ve gotten out hands on the Playstation 5, so we’ll be breaking down everything from next gen gameplay to the Duelsense Controller. Rockstar has announced that Grand Theft Auto 5 and Red Dead Redemption 2, as well as numerous other older games, will be backwards compatible on PS5 and Xbox Series X and Xbox Series S consoles. The Medium from Bloober Team has been delayed to January 28, 2021, due to COVID-19 and, most likely, Cyberpunk 2077’s new release date. Johnny Depp drops out of the Fantastic Beasts franchise following allegations. 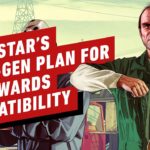