With Super Mario 3D World headed to Nintendo Switch, we put it head-to-head with the original Wii U version to see the differences.

Super Mario 3D World + Bowser’s Fury continues Nintendo’s trend of taking some of the biggest and best games from the Wii U generation and bringing it back to the much more popular Switch platform. But while this is a re-release of an eight-year-old game, it’s not without some neat quality-of-life improvements, which we showcase in this video.

The most obvious change when viewing the games side-by-side is that character speeds have been greatly increased, both in the overworld map and inside stages themselves. You could always hold Y to dash, but now all the characters move significantly faster. This has the added effect of making Toad a much more tricky risk-reward character, since his dash was always significantly faster than other characters, and now he’s just blazing-fast. It also makes moving around the map to choose your next stage move at a speedier clip.

The Switch version is also just more visually attractive. While the fidelity and textures look very similar, the icons have been shrunk to take less screen real estate, and the text boxes have been lightened to let you see the game world more clearly.

And, of course, the strange microphone-blowing mechanic to move platforms has been changed so that platforms now move automatically. That odd holdover just doesn’t belong on the Switch version.

But while the game packs plenty of changes, it’s still the core game at heart. Super Mario 3D World is a rousing platforming adventure with co-op featuring four characters with relatively different power sets. Mario is the all-arounder, Luigi has his fluttery high-jump, Peach can float, and as mentioned, Toad is a little speedster. Finding your rhythm through this series of platforming stages as one of the characters is as engaging as it ever was, and now you can do it via online co-op play.

While Super Mario 3D World is the major re-release, it’s also only half of the package. The other part, Bowser’s Fury, is its own distinct game that marries parts of Super Mario Odyssey’s open-world design with power-ups and elements from 3D World. Rather than complete a series of distinct stages, you’ll be collecting new “Cat Shines” in a vast island environment and intermittently escaping the rage of Fury Bowser. Or even growing huge to battle him face-to-face. This new game is unlike either Mario Odyssey or 3D World. We’ll be showing and talking more about it and the package as a whole in the coming days with our review and launch coverage. 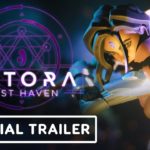 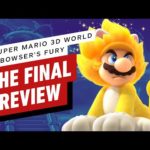