Fallout! It’s a S.P.E.C.I.A.L. set of games with a rabid fan-base (that we’re about to piss off) and plenty of objective flaws to brutally dunk on. IGN’s own Michael Swaim honors the legendary series the only way he knows how, with a series of burns, slams, and simple acknowledgments of the existence of Fallout 76. Like an Enclave/Brotherhood of Steel mixer, it’s going to get dicey, but remember Vault Boys and Girls: it’s all love. Ghoulish, irradiated love. So let’s appreciate and denigrate the entire franchise, from the third-person isometric Fallout 2 days up to and including Fallout Shelter, the Fallout mobile app that let players imagine what it might be like to be quarantined inside for months at a time. Hey, thanks! From the awesome community, stellar mods, and Bethesda’s rocky road, to Obsidian’s departure and game-breaking glitches galore, nothing is off the table.

Come for the roast, stay for the celebration of all things Fallout — like wandering endlessly through flat brown geometry listening to the same song you’ve heard 37 times already. It’s critical! It’s comical! It’s confusing, unless you’re already familiar with the concept of roasts, in which case it’s pretty self-explanatory! It’s the IGN Roast of Fallout! 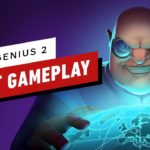