Capcom announced their plans for the months to come and beyond on E3 2021 showcase last Tuesday, June 15, 2021. Among the announcements was of course, for Resident Evil: Village‘s expansion. By popular demand, it looks like Capcom just has to do it. Although no information as of yet as to what the expansion will be about, RE fans can rest, knowing that we’ll get to spend more time on Village.

In other Resident Evil related news, the other RE Netflix show, just named Resident Evil, set up for streaming some time this year has finally announced their cast by Lance Reddick (American Horror Story, Fringe, LOST) who plays their version of the villainous Albert Wesker.

It’s notable that there will also be another actor Lance will be sharing the role with, but for the big screen. Tom Hopper (The Umbrella Academy) will do his own take of the same character for Resident Evil: Welcome to Raccoon City on its November 24, 2021 release. 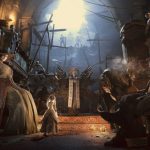