Recompile is a 3D metroidvania that casts you as a virus infiltrating a computer system. But the computer’s defenses won’t let you in without a fight! Game Designer Phi Dinh walks us through a few of the early powers you’ll acquire on your journey.

In Recompile, you are a virus in a digital world, tasked with establishing a sentient AI in a mysterious machine. While the Recompile gameplay brings with it the tropes of metroidvania games, this indie game sets itself apart by giving players the ability to go through, hacking nearly everything in this scifi universe. An action adventure inspired by Tron and Breath of the Wild, Recompile is computer science fiction with a branching narrative. Supporting multiple play styles, it’s possible to unlock various new abilities with a correctly solved puzzle (as seen in this Recompile gameplay trailer). While the developers of the Recompile game were inspired by Zelda, it’s clear from this Recompile trailer that this sprawling scifi hacking adventure is one of the upcoming indie games to look forward to. 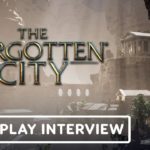