Though shattered after the Battle of Endor, the Galactic Empire closes in on the Bormea Sector, determined to crush the recently-formed New Republic. The Republic’s classified Project Starhawk represents a tipping point in the Galactic Civil War, and ace pilots on each side will be instrumental in its outcome. Get a first look at an early Imperial mission in the single-player story of STAR WARS™: Squadrons, where you must fly behind enemy lines to extract an allied spy with vital intelligence on the project.

Buckle up and experience this action-packed and authentic STAR WARS™ story – following the events in Return of the Jedi – from both sides of the conflict in the cockpits of iconic starfighters. STAR WARS™: Squadrons is available October 2, 2020 on PlayStation®4, Xbox One, PC on EA.com, Steam, and Epic Games Store, and playable in Virtual Reality (VR) on PlayStation 4 and PC with cross-play support.

The New Republic fights for freedom. The Empire demands order. Do you have what it takes to join the galaxy’s finest? 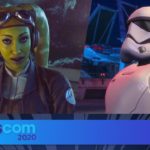