The new PS5 remake of Demon’s Souls makes a variety of adjustments to the From Software game to modernize it, but you can also opt to play with a classic camera and filter to make it more closely resemble the original version.

The new PS5 remake of Demon’s Souls sets out to recreate the original game with various modern touches while still delivering the same core experience. Among other things, the look and camera have both been updated, but if you prefer a look that more closely resembles the original From Software version of the game, you’re in luck.

Developer Bluepoint Games has included both a classic filter and camera angle option, which does away with the more modern-style camera that’s enabled by default in the remake. That way, you can see what feels best for you. The classic filter will also deliver a visual style more in line with the PS3 game, while there are other options on that front, including a black-and-white mode.

Demon’s Souls releases alongside the PlayStation 5 on November 12. It’s among the first wave of next-gen games with an increased price tag, selling for $70 in the US. 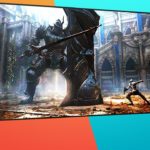