Walter “Fuse” Fitzroy joins Apex Legends. Watch the launch trailer for Season 8 of the free-to-play battle royale game and get another look at the new Legend.

When Salvo joined the Mercenary Syndicate, Walter “Fuse” Fitzroy got his chance to join the Apex Games. Not everyone on his home planet was happy about it. Fuse thought he’d left his feud with Maggie behind him, but she wouldn’t let go so easily. When his big entrance didn’t go as planned, would he still be able to stick the landing? 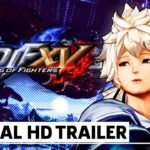